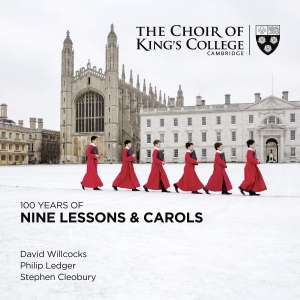 For many, Christmas wouldn’t be Christmas without the sound of carols sung from King’s College Chapel, and each year on Christmas Eve millions around the world enjoy A Festival of Nine Lessons and Carols broadcast live on the radio. A special new two-part collection, available to pre-order from today, celebrates 100 years of the iconic service with a mix of brand-new performances and historical recordings not heard since the original BBC broadcasts.

The first part of this landmark album tells the story of the service’s long history, featuring Directors of Music David Willcocks, Philip Ledger and Stephen Cleobury in recordings spanning from 1958 to 2017. A selection of traditional favourites are accompanied by world premiere performances of contemporary carols, commissioned by the College from leading contemporary composers, including Judith Weir, Arvo Pärt and Thomas Adès.

The second part of the album features brand-new recordings by today’s choir, including Tavener’s The Lamb, We Three Kings, and O Holy Night alongside works by James Whitbourne, Francis Jackson and Richard Elfyn Jones.

Now available to pre-order, the double-disc set is released worldwide on 9 November.