A remarkable tradition reaches a milestone 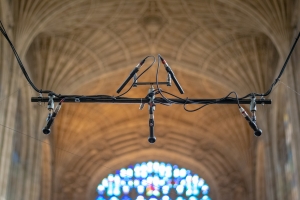 Microphones hanging for A Festival of Nine Lessons and Carols

As the sun set on 23 December 2018 and darkness fell, a small group of people huddled around a gas fire on the cobbles outside King’s College. Later, they returned to their tents for a few hours of sleep. It’s all they got, for in the early hours of the morning they were joined by hundreds of others as a queue formed outside the College. They were to be first in line to collect tickets to A Festival of Nine Lessons and Carols, which would take place in the Chapel nearly twelve hours later.

One hundred years earlier and there was no such midnight queue. A substantially smaller congregation gathered in the Chapel for a new type of service: A Festival of Nine Lessons and Carols in King’s College Chapel upon Christmas Eve 1918. War had recently ended. Many, if not all, were grieving the loss of family, friends and colleagues. Just across the river, the First Eastern General Hospital was still busy dealing with the wounded.

Eric Milner-White, Chaplain of King’s before the war, padre in the trenches during it, and now Dean, would have been mourning the losses too. It was Milner-White who felt that something different from the traditional festive Evensong was needed. And so, though not with universal support, there took place the first Festival of Nine Lessons and Carols at King’s. It began not with ‘Once in royal David’s city’, but with ‘Up! Good Christian folk, and listen’; this particular tradition wouldn’t begin until the following year.

Ten years later, with the service now an annual fixture, it was broadcast for the first time by the BBC. The engineers struggled with the acoustic and, perhaps as a result, didn’t return the following Christmas. But the service was broadcast once more in 1930 and has since become one of the world’s longest-running annual broadcasts. As the decades have passed, the sound of the broadcast has improved; the fundamentals of the occasion have nevertheless remained largely the same.

2018 had particular significance: not only was it the 100th anniversary of the Festival, but it was the last of 37 under the musical direction of Stephen Cleobury. King’s, with its own record label established seven years earlier, recorded the service itself alongside the BBC engineers. Unlike the muddy stereo broadcast of 1918, it was captured this time in pristine surround-sound. While the first service, now more than a century ago, will never be heard again, the 100th anniversary Festival of Nine Lessons and Carols lives on. The tradition continues too, but this particularly special moment of time is kept for posterity.

A Festival of Nine Lessons & Carols: The Centenary Service is available now >