A Requiem for Stephen 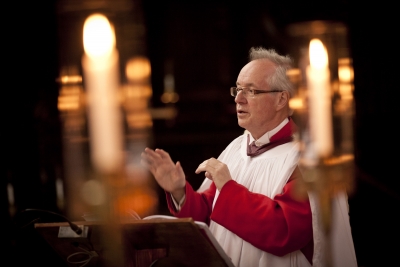 It was with great sadness that King’s College learned of the death of Sir Stephen Cleobury last Friday, St Cecilia’s Day. Stephen was Director of Music at King’s from 1982 until his retirement only recently. His last engagement with the Choir was Evensong on 7 July; a moving service that you can listen to again on our webcasts.

Stephen’s legacy is profound, of which his recordings are only a part. They are, though, a significant part of his legacy, and their quality speaks to Stephen’s innate musicality, his skill and his dedication. We believe that Stephen made not many fewer than 100 recordings during his time at King’s on different labels. In his final years he had the foresight and courage to set up a new record label for the College, taking the Choir into unchartered territory. Recording remained important to Stephen right to the end: not just as a way of sharing music and music-making with as many people as possible, but also as a crucial element of the Choir’s training.

Stephen’s recordings were made to be heard, and so we’ve marked Stephen’s passing with a collection of some of his recorded work over the last seven years on the King’s College label he created. A Requiem for Stephen: In a Greater Light is now available to stream and download across digital platforms including Apple Music, Spotify and Primephonic. A version of this album will become available as a CD next year, as will two more albums recorded by Stephen that are yet to be released.

As with all our own-Label music, any profits go back to King’s to support future music-making, sustaining the incredible legacy that Stephen leaves behind.