Announcing the third release in the Evensong Live series 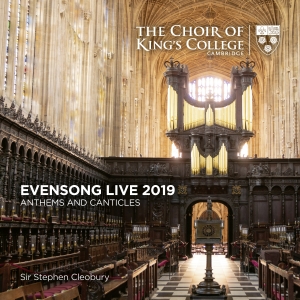 Today we’re announcing the next in the popular ‘Evensong Live’ series, to be released a week today on CD and to download and stream.

Evensong Live 2019 is a collection of nearly 90 minutes of anthems and canticles, recorded live during services of Choral Evensong in King’s College Chapel. This release features an all-British line-up, with the titans of Byrd and Weelkes joined by some of the UK’s most successful contemporary composers such as Judith Weir and Nicholas Maw.

Hubert Parry’s renowned anthem I was glad begins the collection, which also includes the magnificat from his ‘Great’ service. Gerald Finzi’s masterful festival anthem Lo, the full, final sacrifice ends the album, the amen to which is often referred to as one of the most beautiful of all ‘amen’ settings.

This collection presents the Choir of King’s College, Cambridge in its day-to-day work in the Chapel: singing music in choral services to enhance and contribute to worship. These recordings were recorded during 2018 and 2019, with the Choir conducted by Sir Stephen Cleobury, Christopher Robinson and Ben Parry.