King’s College Choir has been awarded a silver play button for reaching 100,000 subscribers on its YouTube channel. The choristers, right, celebrated with a picture in front of the Chapel, holding the glamorous award. 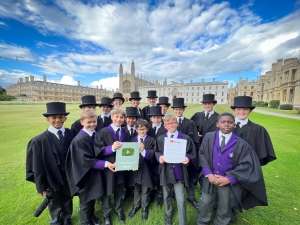 The Choir reached 100,000 subscribers just before Christmas 2021, and since then has added another 20,000 fans to the total. Some of the most popular videos include Allegri’s Miserere Mei, and John Rutter’s All Bells in Paradise, which was commissioned by King’s for the inaugural album on the new record label in 2012. More than 10 million people have watched the Choir’s April Fool from 2014, in which the choral scholars purport to use helium to reach the top note in the Misere Mei. (In fact, no helium was used in the making of the video.)

Artists from beyond the Choir also feature on the channel, including alumni Thomas Trotter and Richard Gowers on the Harrison & Harrison organ, cellist Guy Johnston, harpist Parker Ramsay, and singers Mark Stone, Lawrence Zazzo and the King’s Men. Beyond the realm of performance videos, there is a guide to Bach’s St Matthew Passion, introductions to Byrd, the sackbutt and cornett, and to organ voicing, and interviews with Michael Dennis Browne and Judith Weir.

In 2022, the choristers of King’s released their own series of adverts to promote becoming a chorister.