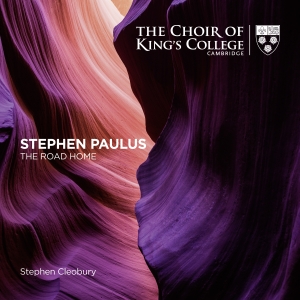 King’s College Choir today marks the birthday of the late Stephen Paulus, a contemporary American composer, with the release of a new recording of The Road Home. Paulus passed away in November 2014, and the Choir first performed this work on their US tour a few months later. It was so well received by audiences that it was performed again in every concert on the Choir’s North American tour in 2017. This is the first recording of the work with a solo boy treble, and is available today to stream on digital platforms. It will also be available with the Choir’s forthcoming album of music by Bernstein and Vaughan Williams.

The Road Home is the result of a 2001 commission by the Dale Warland Singers, and its calm and serene sound-world is enhanced by Paulus’s beautiful use of pentatonic scales. As he describes: “Pentatonic scales have been extant for centuries and are prevalent in almost all musical cultures throughout the world. They are universal.” It is evidence that often the most powerful and beautiful message is often a simple one.

The work is based on a tune discovered in a folk song book called “The Lone Wild Bird”. After falling in love with its music, Paulus made a short recording and asked his good friend Michael Dennis Browne to write new words for the tune. Michael crafted three verses and gave it the title The Road Home. Browne writes so eloquently about “returning” and “coming home” after being lost or wandering. Again, this is another universal theme and this simple little unaccompanied choral piece is now a favourite of choirs all over the world.

You can stream or download the recording from digital platforms: http://smarturl.it/PaulusTRH

If you like The Road Home you might also like Ola Gjeilo’s Serenity which is available on the new album Tecchler’s Cello: From Cambridge to Rome.