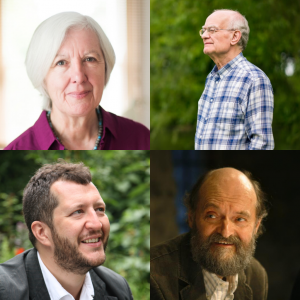 Each year, a leading composer is commissioned to write a carol for the Choir to perform at A Festival of Nine Lessons and Carols on Christmas Eve. The custom was instigated in 1983 with Stephen Cleobury’s appointment as Director of Music as a scheme to refresh continually the celebrated tradition he had inherited.

Composers are chosen not only from the choral or church genre, but more often as successful composers of large orchestral or operatic works, to fold in expertise from other genres and strengthen the contemporary church music repertoire. After some 35 years of newly composed carols, the reception of these commissions become a core aspect of the Festival, with millions around the world eagerly anticipating the new carol’s premiere.

Four of these commissions, also featured on the Choir’s new album 100 Years of Nine Lessons and Carols, are by Judith Weir, Thomas Adès, Arvo Pärt and John Rutter.

Written for the 1985 service, Judith Weir’s Illuminare, Jerusalem sets text from an anonymous medieval Scots manuscript, and remains a regular feature in the Choir’s repertoire. The beautiful simplicity of the setting uses the timbres of the different sections of the choir to illuminate each verse. Judith is one of Britain’s greatest living composers and the first woman to hold the position of Master of the Queen’s Music. Her setting of the National Anthem was premiered at the reinterment of King Richard III in Leicester in March 2015.

Fayrfax Carol gently lilts with rhythmic phrasing and unexpected harmonies, borrowing text from the 15th-century court songbook, the Fayrfax Manuscript, to portray the anguish of bringing the holy child into an unfit world. Commissioned for the 1997 Festival of Nine Lessons and Carols, the arrangement requires all parts to divide and includes a top B for a solo treble. Thomas Adès graduated from King’s College, Cambridge in 1992 with a double-starred first in Music and has since won numerous awards for composition. He was awarded a CBE in the 2018 Queen’s Birthday Honours.

Arvo Pärt’s Bogoróditse Djévo (Rejoice, O Virgin) is a lively homage to the Virgin Mary, commissioned for the Festival in 1990. Hailing from Estonia, Pärt lived for over three decades under the Soviet Union’s occupation before being forces to emigrate with his family to Vienna in 1980 in light of controversial reviews and confrontations with the authorities. He is celebrated for his compositional technique – tintinnabuli – chorally capturing the effect of striking a bell.

This carol was not actually written for A Festival of Nine Lessons and Carols, but for Carols from King’s, the BBC television service broadcast in the UK on Christmas Eve. Written for King’s in 1999, John Rutter’s Dormi, Jesu combines both an anonymous Latin text with the English translation by Samuel Taylor Coleridge. It is a sweet and warm lullaby. Rutter is described as ‘the undisputed King of Christmas’, notably co-editing four volumes of Carols for Choirs with Sir David Willcocks, and his music is loved and performed by choirs and ensembles around the world.

All of these tracks and others, some of which are the premiere performances, are available on the new album 100 Years of Nine Lessons & Carols.