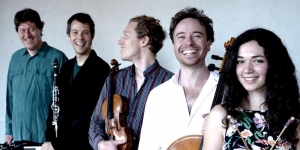 An event from the Easter at King’s Festival, Blazing Harmonies: the Spirit of Etty Hillesum, has been made available as an audio webcast, in full. The event is a performance based on extracts from the diaries and letters of the young Jewish woman, Etty Hillesum (read by actor Rosie Hilal), interspersed with narration by Donald Macleod and music from the gypsy band, ZRI.

The diaries and letters presented here span 1941-43, and describe Etty’s experience as the Nazis implemented the Final Solution. The writings are often described as an honest and engaging testament to the unfolding horrors, as well as being deeply reflective: they describe Etty’s spiritual awakening and her inner turmoil.

Included in Blazing Harmonies are Etty’s last recorded words, written on a postcard and thrown from a train as she was transported to be killed at Auschwitz.

The programme was devised by the Dean of King’s, Stephen Cherry, who wrote:

“One of the reasons Blazing Harmonies came across so powerfully in the Chapel was because of the skill of the performers, not least the actor Rosie Hilal who read from the diaries. Time spent with Jon Banks of ZRI was also very important in the preparation. The shared energy and respect within ZRI was an extremely enjoyable and inspiring part of the preparations, and an integral aspect of the whole evening; informing the audience’s response to the words read, the place and the occasion. Finally, Donald Macleod’s instantly recognisable voice added precision and colour to the words I had written to help the story along; not an easy task given the huge gaps that were obviously left.

“I hope that you enjoy the webcast and get drawn into reading Etty’s dairies yourself, and thinking, with her, through some of life’s deepest questions and perplexities. She inhabited a specific historical moment in a very particular way; but her courage, candour, questing and ultimate calm will shine out as long as people encounter her words.”

Blazing Harmonies is available as a webcast on the King’s College website until Friday 25 May 2018. Listen >

Please note that dispatch of CDs will take longer than normal. Thank you for your understanding. Dismiss