King of Instruments debuts at #1 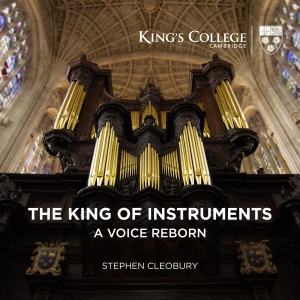 Recorded just months after the successful competetion of the 2016 organ restoration at King’s, Stephen plays a varied programme designed to show off the different colours and the dynamic range of the restored instrument. The coveted #1 spot was taken by the album The King of Instruments: A Voice Reborn which means it was the best-selling fully-classical album in the UK upon its release.

Six of his chorale preludes are highly absorbing, not least because Cleobury finds a different registration for each. Franck’s Pièce héroïque mines a deep shaft of basso sonority that contrasts with the prevailing textural delicacy, and indeed deliciousness, of the Bach and a Mendelssohn sonata. The effect is magnificent.

The launch of the album coincided with the release of a timelapse of the organ restoration, set to music from the new album.

Find out more about the King of Instruments: A Voice Reborn on the King’s College recordings website.