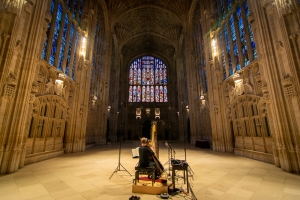 Recorded in the unique acoustic of the King’s College Chapel, this version of the Goldberg Variations was created by Parker in part to make a statement about the harp: “I wanted to show the world that the harp is an instrument of beauty, sincerity and transcendence, standing alongside the keyboards and string instruments as a worthy vehicle for the music of J S Bach.”

This is Parker’s first solo harp recording, and the third recording by an alumnus on the College’s own label. The album is accompanied by extensive notes by Pulitzer Prize winning music critic Tim Page and leading Bach scholar Burkhard Schwalbach.

Parker Ramsay’s career is distinguished by its breadth and crossing of instrumental boundaries and genres at the harp, organ and harpsichord. He was the first American to hold the post of Organ Scholar at King’s, from 2010–2013, following a long line of prestigious predecessors.

“My decision to take on the Goldbergs wasn’t solely intellectual or musical. Embedded in the album are all the elements of my past and my identity. There’s the Chapel at King’s, where I was once an organ scholar; there is the harp, which I studied with my mother from a young age; and there is the quirkiness of Manhattan, where I keep my office, and where my mother had her lessons with Marcel Grandjany, a harpist and organist who had a keen affinity for playing Bach on the harp. The CD isn’t just about Bach, or the harp or New York, – it’s also about my family, my musicianship and my two lives on either side of the Atlantic.”  – Parker Ramsay