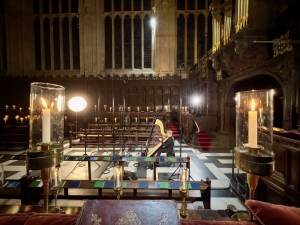 Acclaimed harpist Parker Ramsay is to release a recording on the King’s College label of a new work for harp commissioned by King’s College. The Street is a concert-length work for harp, plainsong and narration, based on the 14 Stations of the Cross, with music by American composer Nico Muhly and text by poet Alice Goodman. Premiered as part of the Easter at King’s festival this year, the work is due for release later this year.

The album marks Parker Ramsay’s second outing on the King’s College label. His first, Bach’s Goldberg Variations, received widespread acclaim, receiving five stars from BBC Music Magazine, ‘Critics’ Choice’ from Gramophone, and described as “a resounding success” by the Independent. Joining Parker on The Street will be the men of the Choir of King’s College, Cambridge, and actress Rosie Hilal. Accompanying the new work will be a new arrangement of Bach’s Partita No. 2 in C minor, also recorded on the harp in the resonant acoustic of King’s College Chapel.