The most famous of the Four Motets is Ubi Caritas (‘Where charity and love are, God is there’), a staple of the Choir’s Easter repertoire which was sung at Downing Street when the Choir attended the Prime Minister’s Easter Reception in 2013. The Choir is joined by Patricia Bardon – youngest ever winner of the Cardiff Singer of the World Competition – for the Pie Jesu of the Requiem, with the other solo sections sung by the Choral Scholars of the Choir in accordance with Duruflé’s instructions. Former Choral Scholar Ashley Riches returns to the Choir as soloist in the Messe Cum Jubilo.

“You’ll get a real sense of the drama, the dynamic range of the recording, the colour and that famous acoustic of the baleful period trumpets.” – BBC Radio 3 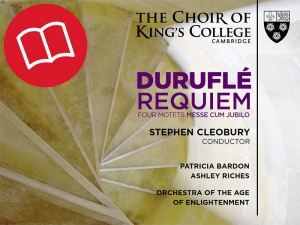