Mozart Requiem: Realisations is an exploration of the history and influence of Mozart’s famous Requiem. It begins with a full recording of the Requiem in the popular completion by Mozart’s pupil and amanuensis, Franz Xaver Süssmayr, followed by full movements completed by other composers including Michael Finnissy and Duncan Druce.

The second disc presents a 68-minute audio documentary on the musical roots of the Requiem written by the renowned Mozart scholar Cliff Eisen, featuring musical examples from the Requiem and the works from which it draws inspiration whilst highlighting striking similarities between Mozart’s work and that of several contemporaries and predecessors.

The Choir, conducted by its Director of Music, Stephen Cleobury, is joined for the recording by the Academy of Ancient Music playing period instruments. The soloists are Elin Manahan Thomas, Christine Rice and former King’s College choral scholars, James Gilchrist and Christopher Purves.

Director of Music, Stephen Cleobury, said, “It is particularly special for me to have made this recording because I have known this work since I was a child and loved it very much. To have the chance to record it and to express some of my thoughts about it is just wonderful.

“I think our recording with boy trebles and period instruments will bring to the piece a particular strain of authenticity, and I hope that the sound world it inhabits will reflect something of what Mozart himself might have heard, if he had lived to hear the work performed.” 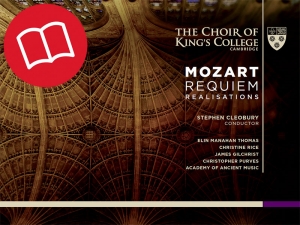 Disc One (Hybrid-SACD, with high-resolution stereo)