A Festival of Nine Lessons & Carols: The Centenary Service (Download)

Looking for the two supplementary tracks for the CD product? Download them here.

In 2018 Sir Stephen Cleobury and the Choir of King’s College, Cambridge celebrated 100 years of Nine Lessons & Carols, the iconic festival that is enjoyed by millions around the world each year at Christmas time. Now this landmark event is available in its entirety on the official anniversary release from the King’s College label.

In addition to being the 100th anniversary, the 2018 Festival marked the final time that Sir Stephen Cleobury, the College’s longstanding Director of Music, would lead the service before his retirement in September 2019. During his tenure, Cleobury introduced the tradition of commissioning a new carol each year, and this release includes the world premiere of O mercy divine, written by current Master of the Queen’s Music, Judith Weir.

Captured in the highest quality at up to 192kHz and 24-bit audio, A Festival of Nine Lessons & Carols: The Centenary Service is the definitive account of the anniversary and the opportunity to experience a once in a lifetime piece of musical history.

In the bleak mid-winter James Micklethwaite

During the service the organ was played by the Senior Organ Scholar, Henry Websdale. 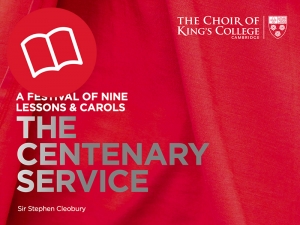 Recorded live at 192kHz 24-bit PCM in the Chapel of King’s College, Cambridge, by kind permission of the Provost and Scholars, 24 December 2018.

With thanks to Steve Richards and the BBC Radio Outside Broadcast team.

Read more about the 1918 service booklet in the news story.