The Music of King’s: Choral Favourites from Cambridge

The Music of King’s: Choral Favourites From Cambridge is a celebration of choral music throughout the ages and around the world. Its track list spans more than 400 years of composition, with compositions from countries including Germany, France, Great Britain, Italy, Norway, America and China.

For this latest album on the Choir’s own label, Stephen Cleobury has chosen to present a selection psalms, folksongs and other exceptional works that have stood the test of time alongside some of the Choir’s contemporary favourites. Highlights include Ola Gjeilo’s setting of Ubi caritas, Antonio Lotti’s Crucifixus and James Erb’s arrangement of the much-loved American Folksong Shenandoah.

The pieces we have chosen for this album reflect something, though not all, of  the breadth of the Choir’s repertoire. That they should be chiefly liturgical is natural, since the Choir’s main work consists in singing at the daily chapel services in term time. The new ecumenical understanding which has grown up during my working life permits now the singing of the mass and canticles in Latin, anthems in that language having found their way into service lists even earlier. This enables us to look to the continent of Europe to add to the great inherited tradition of British music. We have also included some of our more rare excursions into non-liturgical and secular repertoire, here represented by American and Chinese items.
Stephen Cleobury 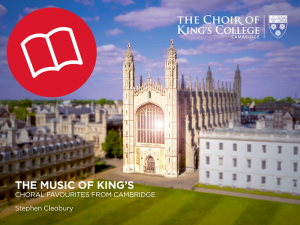