Recording the King of Instruments

The first ever surround-sound recording of the magnificent organ of King’s College Chapel was made by the Director of Music, Stephen Cleobury, in 2015 – with some of the greatest works by Liszt, Reubke and Mendelssohn all represented.  The beautiful acoustic of the Chapel and the sound of King’s organ is distinctive, but an instrument such as this needs regular renovation and attention. 2016 has seen the completion of a major restoration programme for the organ, and the Director of Music will be making a new recording in January to share the new colours of the renovated instrument, ready for release later in 2017. 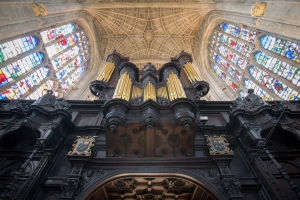 The restored Chapel organ, viewed from the east side

Physical products may currently take up to a week longer than normal to dispatch. Downloads available as normal. Dismiss