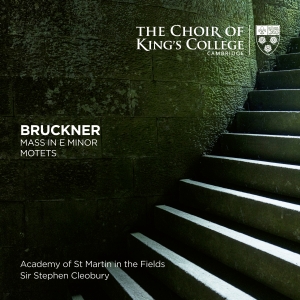 King’s College has released the final album recording by the late Director of Music, Sir Stephen Cleobury. Recorded just a few months before his death, Sir Stephen recorded with the Choir of King’s College, Cambridge for the last time alongside the Academy of St Martin in the Fields.

Music by the 19th-century composer Anton Bruckner was selected for this momentous occasion: his Mass No. 2 in E minor for choir and wind instruments is accompanied by a selection of his beautiful motets and the extraordinary Ecce sacerdos magnus, written for choir, organ and trombones.

The album is accompanied by two commissioned essays. A moving ‘Appreciation’ of Sir Stephen Cleobury, written specially by his friend and colleague Professor Iain Fenlon, is joined by a reflection on Bruckner’s life and work – Shades of the Past in Bruckner’s Sacred Music – by Dr Martin Ennis.

The album is available in 5.1 surround-sound, allowing listeners to immerse themselves in the glorious acoustic of King’s College Chapel, as well as in ultra-high-resolution ‘Studio Master’ audio.