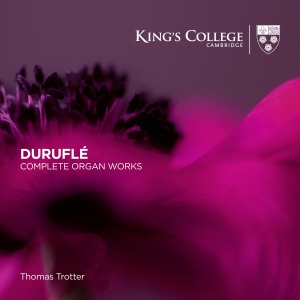 Thomas Trotter’s recording of Duruflé’s Complete Organ Works has won rave reviews across the board following its release this summer. Trotter, a former King’s Organ Scholar, returned to the instrument he played as a teenager to record on the King’s College label the organ music of one of the great French composers of the 20th century.

BBC Music Magazine have given the recording five stars for both performance and recording, describing it as “a tour de force“:

“An enthusiastic champion of orchestral transcriptions, Trotter is adept at exacting the maximum variety of colour, navigating the tonal resources of the King’s instrument with seamless proficiency and fertile imagination.”

The album has received five stars from the Birmingham Post as well, who praised the quality of the recording, produced by Gary Cole and engineered by Benjamin Sheen:

“The superbly engineered recording captures the college’s spacious acoustic and does full justice to the magnificence of Trotter’s playing.”

Gramophone has made the album an ‘Editor’s Pick’, calling it “a genuinely exceptional organ release”:

“With remarkable clarity of articulation, outstanding virtuosity and an instinctive feel for registration, Trotter turns out performances that are top of the pile when it comes to compelling performances of this repertory.

“Add to this an exceptionally fine recording, which has captured instrument, acoustic and playing with impeccable detail without any sacrificing of atmosphere, and we have here a genuinely exceptional organ release.”

Trotter’s album has received praise internationally as well, with five starts from Australia’s Limelight Magazine, and praise for Thomas’s “convincing” performances in the Wall Street Journal.

Duruflé: Complete Organ Works is available to buy on CD, to download in ‘Studio Master’ high resolution, and on all streaming platforms.