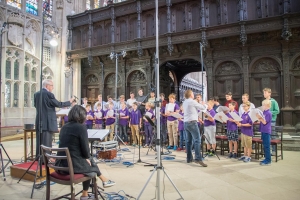 At the Backs of King’s College there is a memorial stone in white marble commemorating an alumnus of the College, renowned Chinese poet Xu Zhimo. Moving to the UK in 1921, Zhimo spent a year studying at King’s, where he fell in love not only with the romantic poetry of English poets like John Keats, but also with Cambridge itself.

His poem, 再别康橋 (variously translated as Second Farewell to Cambridge), is arguably his most famous poem, and is now a compulsory text on Chinese literature syllabuses, learnt by millions of schoolchildren across the country every year. The poem paints an idyllic portrait of King’s and the River Cam:

The golden willows by the riverside
Are young brides in the setting sun;
Their glittering reflections on the shimmering river
Keep undulating in my heart.

While the poem has been set to music many times before, King’s has commissioned the first musical setting of the text by a mainstream classical composer. The new piece, by renowned English composer John Rutter, has been written and recorded in celebration of the near 100-year link between King’s College and Xu Zhimo, and is available on the new compilation album Second Farewell to Cambridge.

The new album, released 26 January 2018, features this new recording alongside another new arrangement of 茉莉花 (The Jasmine Flower Song) by King’s Director of Music Stephen Cleobury, as well as a vibrant selection of music from across the King’s label, some of which is made available in surround-sound for the first time.

Softly I am leaving,
Just as softly as I came;
I softly wave goodbye
To the clouds in the western sky.

The golden willows by the riverside
Are young brides in the setting sun;
Their glittering reflections on the shimmering river
Keep undulating in my heart.

The green tape grass rooted in the soft mud
Sways leisurely in the water;
I am willing to be such a waterweed
In the gentle flow of the River Cam.

That pool in the shade of elm trees
Holds not clear spring water, but a rainbow
Crumpled in the midst of duckweeds,
Where rainbow-like dreams settle.

To seek a dream? Go punting with a long pole,
Upstream to where green grass is greener,
With the punt laden with starlight,
And sing out loud in its radiance.

Yet now I cannot sing out loud,
Peace is my farewell music;
Even crickets are now silent for me,
For Cambridge this evening is silent.

Quietly I am leaving,
Just as quietly as I came;
Gently waving my sleeve,
I am not taking away a single cloud.