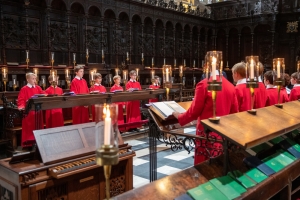 King’s College has marked Armistice Day with the release of an audio webcast interspersing Fauré’s Requiem with readings of scripture and poetry. It is the first recording of the full choir since the UK went into lockdown in March this year, with the choral scholars spread out amongst the congregational stalls. The choristers, who are in a household bubble, sang in their usual positions.

The choir’s performance was performed to an empty chapel, while the readings were recorded by members of the College’s mixed voice choir, King’s Voices, in their College rooms. The Dean, Revd Dr Stephen Cherry, has writes:

The national lockdown that began on November 5th has presented those responsible for places of worship with the challenge of finding ways to sustain communities and individuals while not doing what they do best – allowing people to gather for a meaningful liturgy in a sacred space. This absence of opportunity is not a release from responsibility, however, and we, like many others have been challenged to make a creative response to the difficulties of our time.

Offered here is the synthesis of two Chapel occasions that had been planned quite separately. A Sung Requiem Mass for Remembrance Sunday and a sequence of words and music for Armistice Day that would have been presented by King’s Voices. In the end neither happened, but the Choir has recorded the Fauré Requiem and members of King’s Voices have used their phones to record the poetry and scriptural passages that were planned for Armistice Day.

The result is a profound mediation on the meaning of sacrifice, the sadness of war, our longing for peace and the triumph of hope. It is no substitute for a live event, but if we allow what is offered here to speak to our souls it might help sustain us until we do meet again, whether in Chapel or on another shore and in a greater light.

You can listen to the sequence of words and music on the King’s College webcasts page.