This is a guest blog post by Dr Kate Kennedy, a Research Fellow at Oxford University. Music by Ivor Gurney and William Denis Browne is featured on the new recording Proud Songsters.

And who loves joy as he
That dwells in shadows?
Do not forget me quite,
O Severn Meadows.

There’s nothing so brutal as a world war for scything across populations. Mass conscription of civilians ended careers with importunity, whether they be of greengrocers, accountants, or musicians. Britain had more than its fair share of composers who did not survive the First World War, including George Butterworth, William Denis Browne, Ernest Farrar and Frederick Septimus Kelly. Then there are other less clear-cut but equally unfortunate cases, such as Ivor Gurney, a war poet and composer, who managed to survive the trenches only to be incarcerated in a lunatic asylum for the final 15 years of his life; condemned to a kind of living death. All of their work takes on an added poignancy, an extra layer of resonance, as our knowledge of their truncated lives casts a very particular shadow across everything we hear. 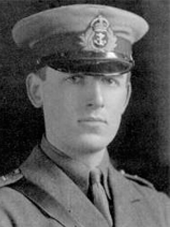 William Denis Browne was killed in the massacre that was the Gallipoli campaign when he was only 27. Only a handful of his music survives, after a regrettably ruthless cull by the well-meaning Professor of Music and King’s Fellow Edward Dent, who, following Browne’s instructions, burnt a large quantity of his early manuscripts. The surviving works are spread between Clare College, where he had been the organ scholar, and the British Library. It was in a little room in Clare College’s Memorial Court (as fitting a place as any), that I first held Browne’s manuscripts, and found a jiffy bag containing the score of his ballet, The Comic Spirit. After its student premiere, Browne had hoped that Diaghilev and the Ballets Russes would put on a performance of his work, but the war had intervened and it had remained forgotten, in manuscript, ever since. With the help of the Central School of Ballet, and Southbank Sinfonia, we managed to choreograph a series of performances of it in Cambridge and London, and later record it with the BBC Philharmonic during the 2014-18 centenary. It is still unpublished, but at least now one of Browne’s most substantial works has a chance of being heard, and his small but significant legacy can be seen in its entirety.

For some composers, the imagination-capturing fact of their premature death helps maintain their popularity (although this is small compensation for the dead composer), but in the majority of cases their death means more obstacles to fame than a cementing of reputation. There is often little music to remember them by, and what there is might not be published. Papers and archives are usually in disarray, and the young unfortunate’s fame is rarely established enough to secure a place in the canon of well-remembered composers. Some have families who work to preserve the composer’s posthumous reputation, but others, like Ivor Gurney, died with little or no money, and a family unable or unwilling to champion them. As a result such figures can quickly become almost entirely forgotten, and it is the biographer’s job to pull together what material can be found, and present a picture of the composer and their achievements that will help to secure their position in our musical memories. For the past decade or so, I’ve been researching Gurney’s life and work, tracing his progress from the Royal College of Music through the trenches of Flanders and the Somme, his attempts to establish himself as both composer and poet in the intellectual world of post-war London, and, in 1922, his family’s decision to have him certified insane, which resulted in his incarceration for most of his adult life. He wrote prolifically from within the asylum, producing poems, songs, chamber music and essays. But as far as he was concerned, no one was listening. It was a terrible kind of liberation. With no audience, he was free to write as he chose, and his work became increasingly experimental and daring. However, he was writing for his life, writing to establish a sense of himself in the face of the mental illness that would ultimately overwhelm him, and an institution that knew him as a mental patient who ‘claimed to be musical’, rather than one of the brightest stars on the musical and literary horizons.

Such figures as Denis Browne and Gurney present us with innumerable editorial and ethical puzzles. How do we represent a life and its work, navigating the tragedy of the story that threatens to overwhelm the achievements, and present the music and poetry to the world in a sensitive, informed context? How, in Gurney’s case, do we negotiate the stigma of ‘madness’ and do justice to a huge body of forgotten and unpublished work? One way to bring such marginalised figures to the centre is to hear their voices alongside their more fortunate contemporaries in collections such as the new Proud Songsters album from King’s College. I believe both Gurney and Browne would have been delighted.

Biographer and broadcaster Kate Kennedy is a Research Fellow at Oxford University, and the author of Dweller in Shadows: A Life of Ivor Gurney, which will be published by Princeton University Press on 15 June 2021. www.drkatekennedy.com

Music by Ivor Gurney and William Denis Browne is included on the new album of English solo song on the King’s College label. Proud Songsters is available to buy on CD, to stream, and to download.