This album brings together the first ever surround sound recordings of the great Harrison & Harrison organ set within the chapel of King’s College, Cambridge. Performing three popular virtuosic works for the organ, Stephen Cleobury, Director of Music at King’s College, demonstrates the power and flexibility of this great instrument.

Originally built in the 19th century to replace an earlier instrument, the organ has been modernised several times and underwent major renovation in 2016. 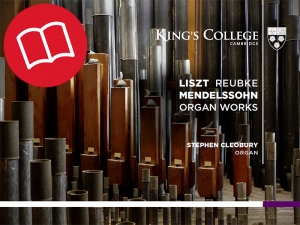