1918: A Festival of Nine Lessons and Carols 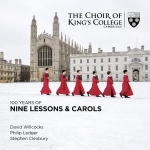 First held on Christmas Eve in 1918, it was planned by Eric Milner-White who, at the age of thirty-four, had just been appointed Dean of King’s. This followed his experience as an army chaplain – an experience convincing him that the Church of England needed more imaginative worship.

One year later, a revision of the Order of Service was made in 1919, involving rearrangement of the lessons, and from that date the service has famously always begun with the hymn ‘Once in royal David’s city’. In almost every year some carols have been changed and some new ones introduced by successive Organists: Arthur Henry Mann; Boris Ord, Harold Darke, Sir David Willcocks, Philip Ledger and Stephen Cleobury. The backbone of the service, the lessons and the prayers, has remained virtually unchanged.