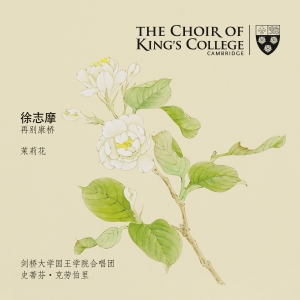 In celebration of Chinese New Year, a new music video for the Mandarin Chinese recording Second Farewell to Cambridge is has been released. This setting was created by distinguished English composer John Rutter and headlines the 2018 album (also featuring the Jasmine Flower Song alongside choral favourites from King’s). The audio is available to stream across digital platforms, and the new video is currently on NetEase, iTunes and YouTube. The video was shot in the beautiful grounds of King’s College written about so eloquently by poet Xu Zhimo, and in the world-famous Chapel with its legendary acoustics.

Second Farewell to Cambridge was the first time in the Choir’s 500-year history that they recorded songs in Mandarin Chinese. The name originates from the famous Xu Zhimo poem and celebrates its legacy. The album’s accompanying booklet is in Mandarin Chinese in homage to the special connection the College shares with China and Xu Zhimo.

The young poet studied at King’s College from 1921-1922 and wrote this poem in 1928 when he revisited King’s. It paints an idyllic portrait of King’s. A granite stone in the grounds, carrying the first and last lines of the poem, has become one of the University’s most popular tourist attractions.

While Second Farewell to Cambridge has already been adapted into many pop songs, this recording marks its first mainstream classical interpretation, and the new composition by acclaimed English composer John Rutter opens this album. It is joined by Stephen Cleobury’s new arrangement of the eighteenth century folk song Mo Li Hua (Jasmine Flower Song) and a selection of choral favourites from across the King’s recording catalogue. The cover image of this album, the Chinese Jasmine flower, is painted by Yu Hui, a well-known Chinese Painting artist from Jiangsu Province, China, who specialises in flowers and birds.

Second Farewell to Cambridge is now available in China via QQ Music, NetEase Cloud Music, Baidu Music, Xiami, KuGou and Kuwo, as well as on Apple Music & iTunes in China and Chinese-speaking territories outside of mainland China.